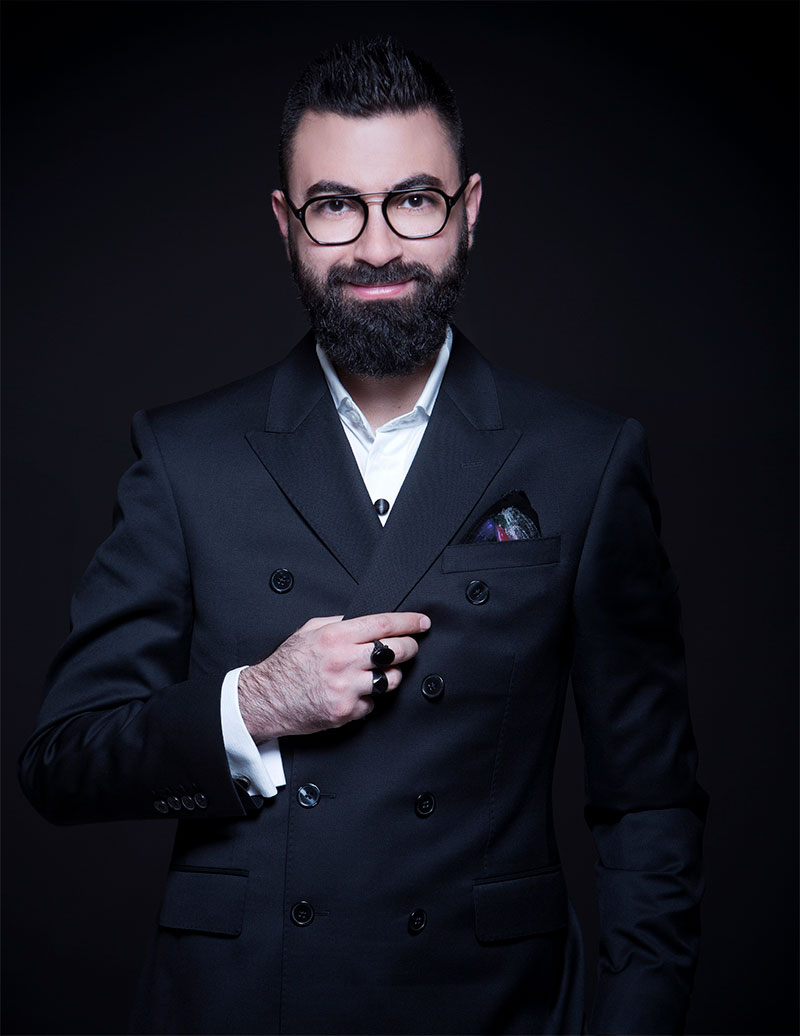 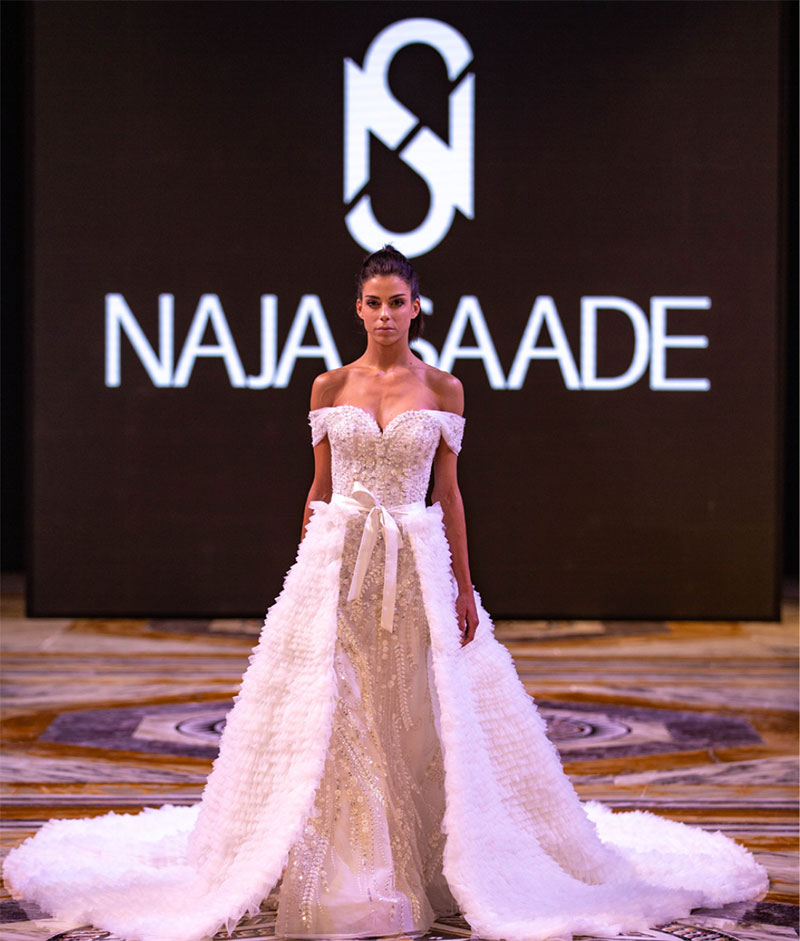 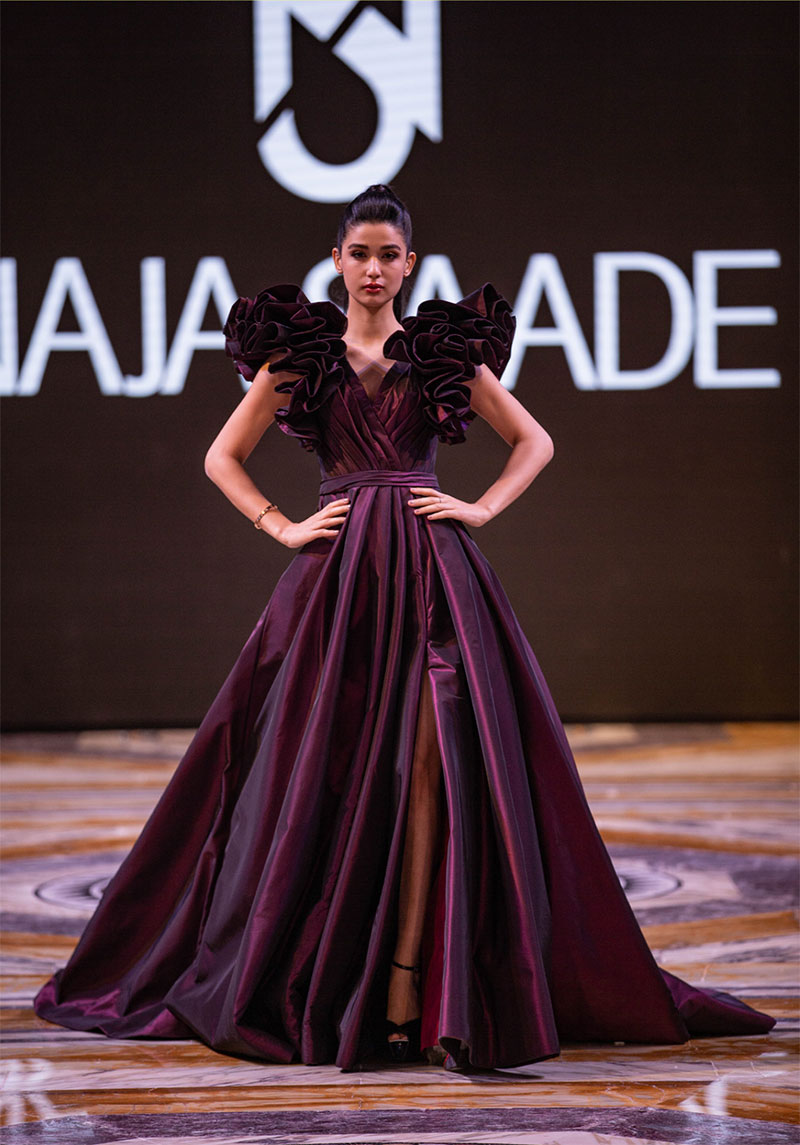 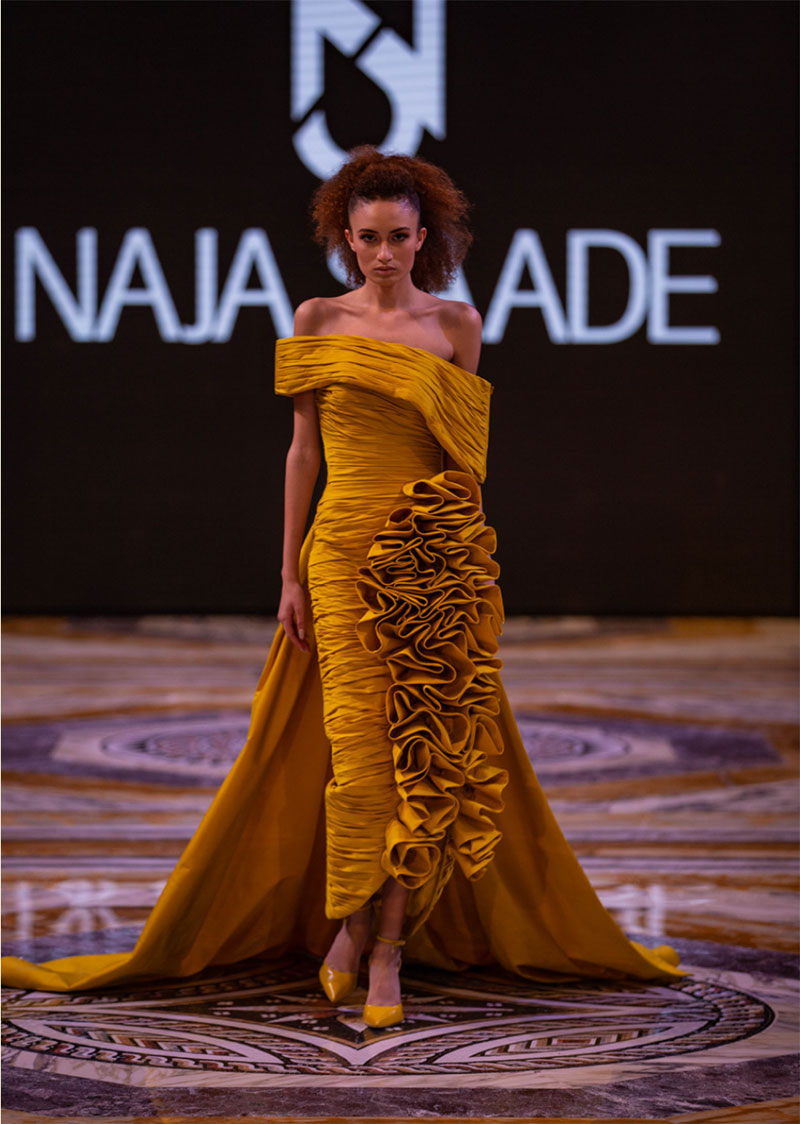 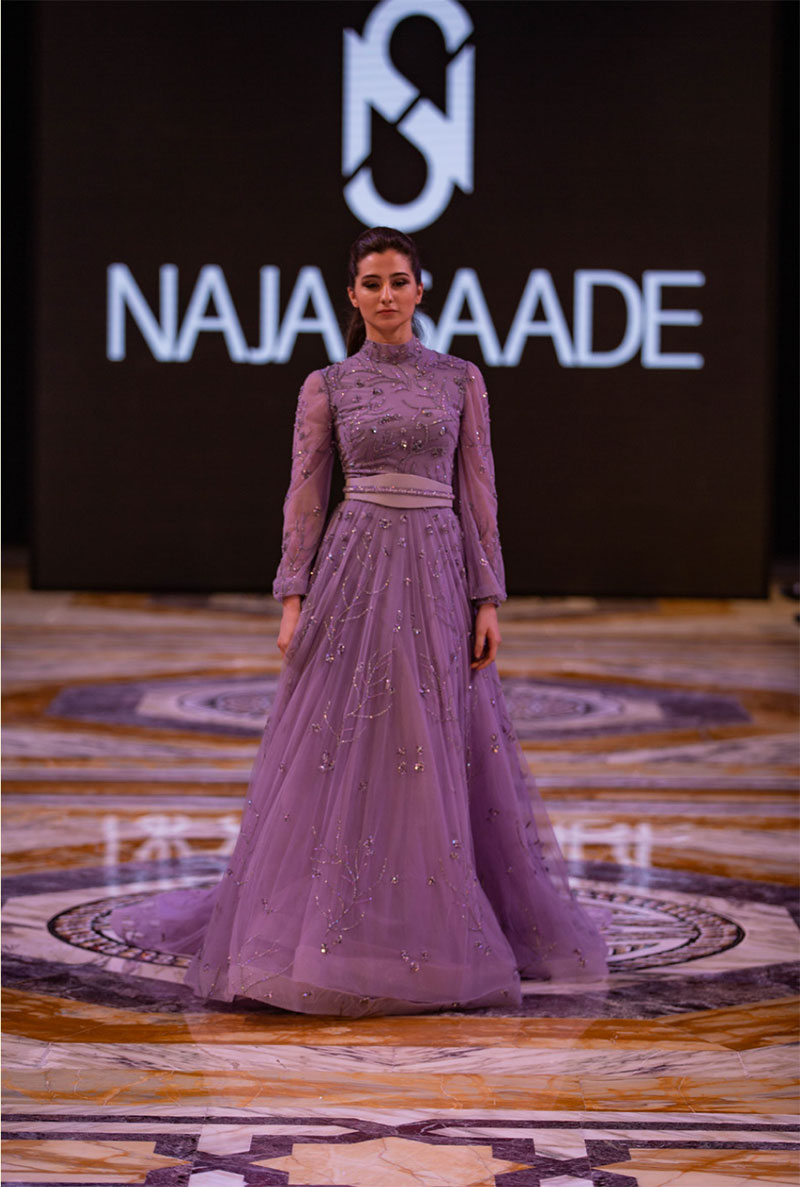 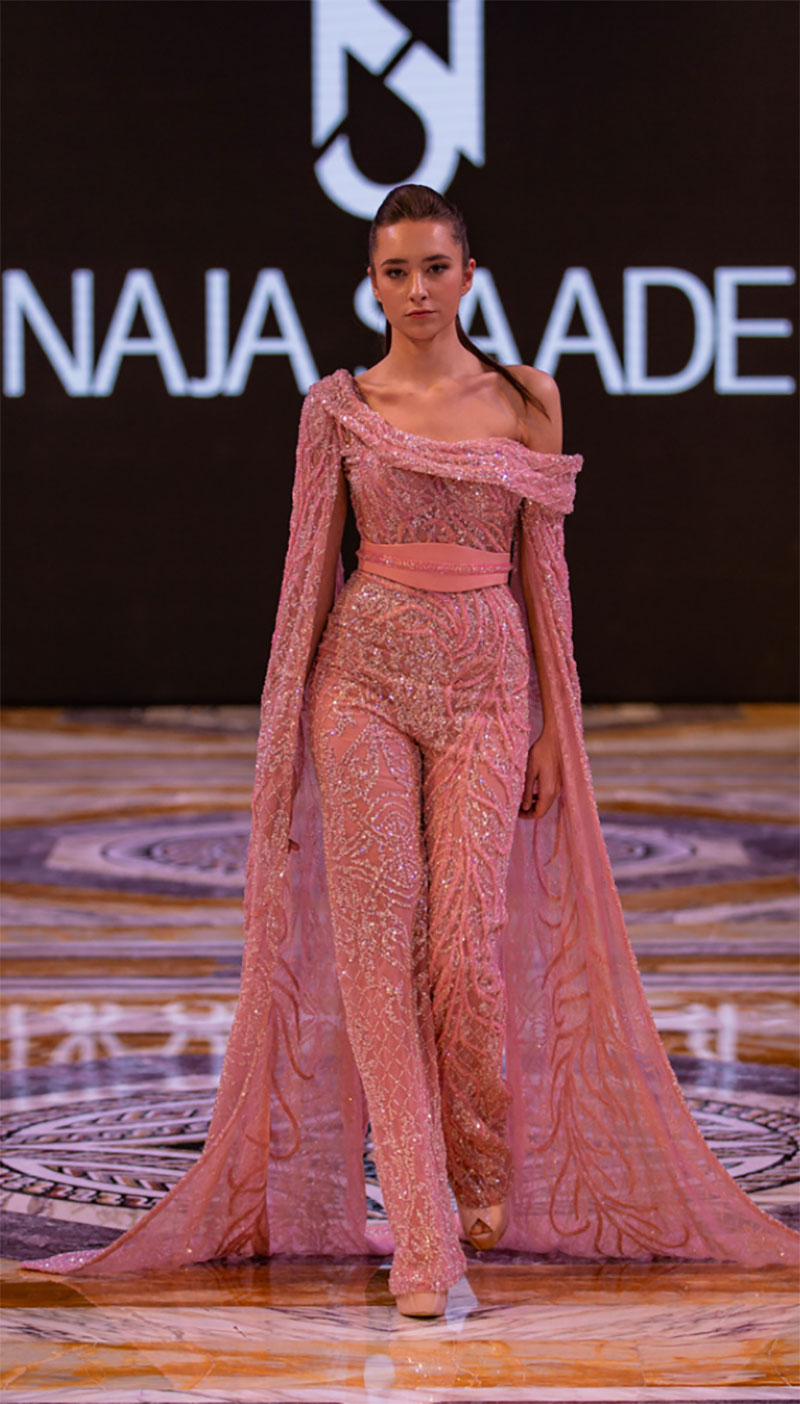 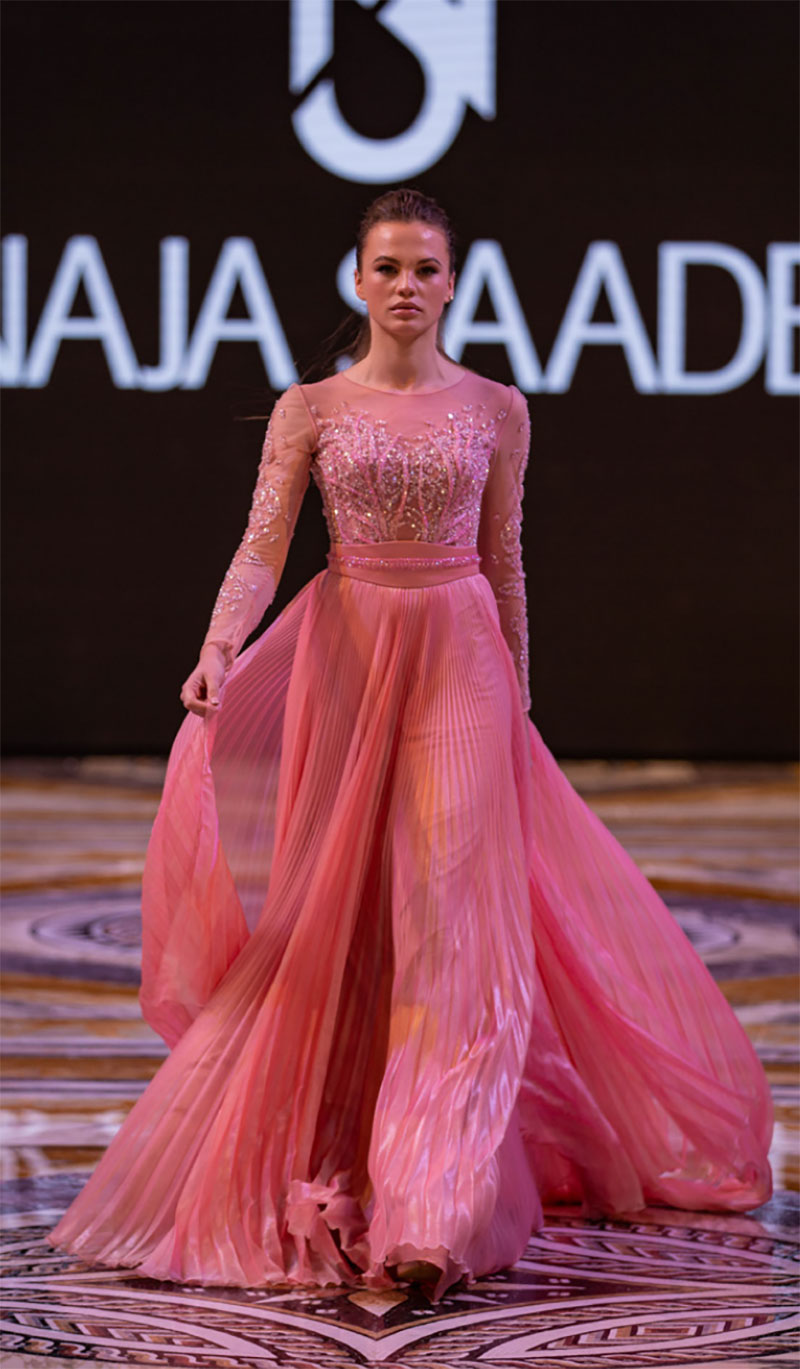 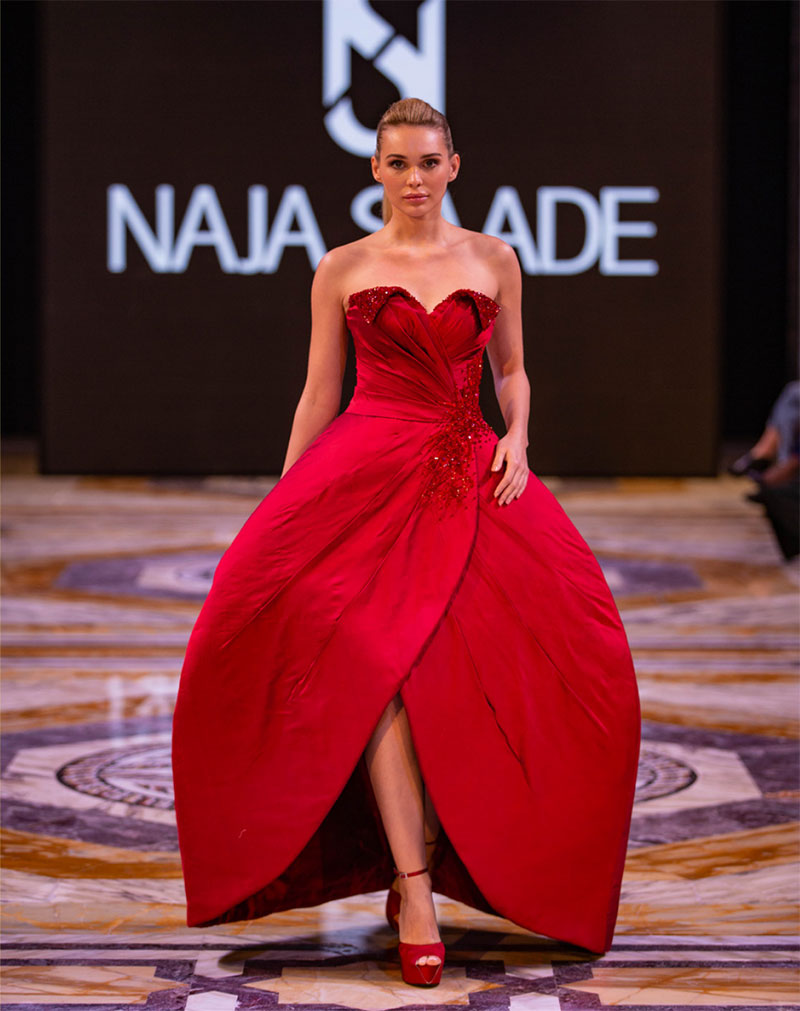 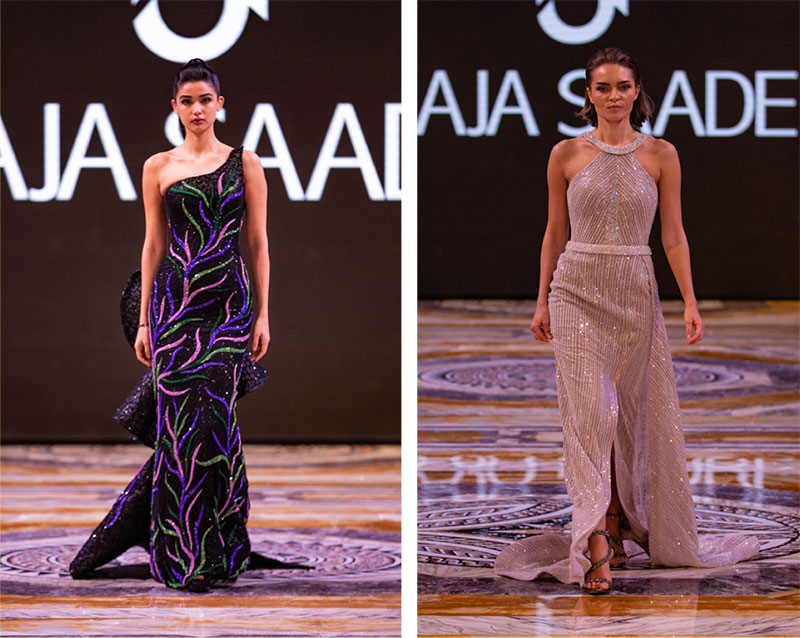 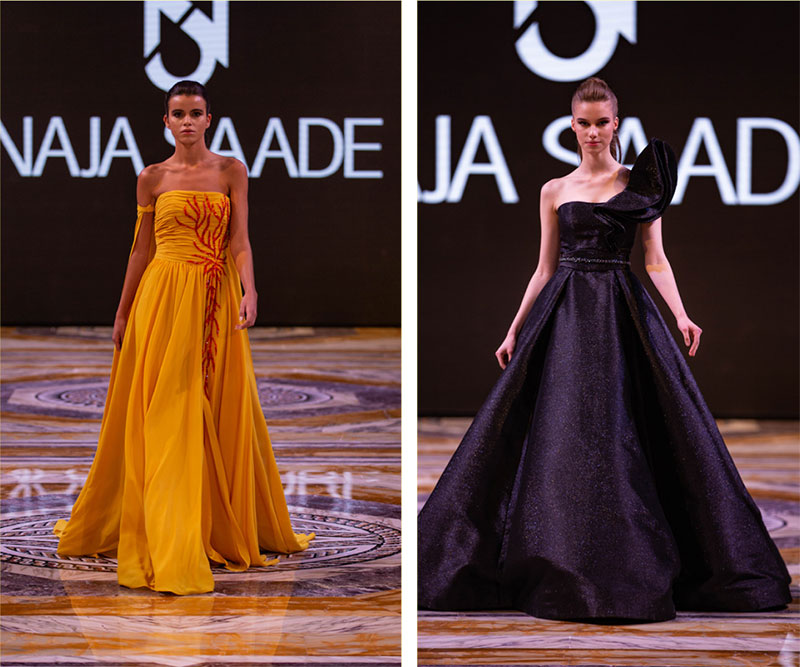 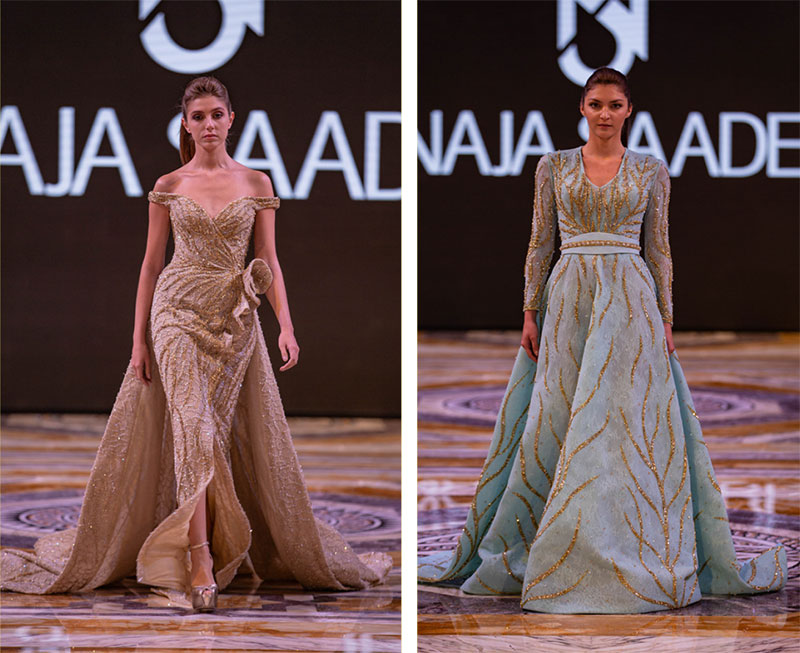 With the continuous love of the Arabic fashion industry, our local editor ANUSHAY KHAN met the man behind the design, NAJA SAADE and delved into his world of charm and glamour.

When we look at Naja Saade’s bespoke regal designs with lavish cuts and inspiration infused design from everything around him, you would never believe the man behind this pretty picture. Naja, a minimalistic young man who is discovering his love for the holy grail of fashion is as human as a designer could get. I don’t think he truly realises the talent that he possesses or the mountains that he has already climbed.

In Naja Saade’s latest fashion show in Qatar he showcased a mix of his latest collections Rebirth and Spirit of the Time and I was in awe of the ‘simple’ way his inspiration and process flowed. I say ‘simple’ because of the technique and thought that went into it and how casually Naja spoke about spending countless hours in the studio and finding symmetry in everything around him, only to translate it into a pattern and eventually fashion. Specialising in bridal and evening wear, Naja is someone that exacerbates a positive aura around him and I was absolutely mesmerised.

I was enthusiastic to meet the man behind the swish designs of the brand Naja Saade, named after the designer himself, and had a stereotypical image of him formulated in my head. I had received the latest collection’s sneak peek just a few hours before I met him and I already had a series of questions transcribed. I sat at St.Regis’ beautifully decorated lobby and waited for Naja to join me for a quick cup of coffee and gush about his craft.

What I expected was a suited-and-booted guy with a flaunty attitude, however, I was met by a man dressed in chic casual wear and a smile that put me at ease instantly. We exchanged greetings and I was surprised to actually see him as excited as I was to interview him. I knew all about his schedule and thanked him for fitting us in between appointments to which he simply retorted that ‘Ohlala is a huge deal, knowing that the Qatari market appreciates seeing more of Naja Saade published locally’… Well, hello humility and my now favourite person in this industry.

We spoke about how he was the first in his family to actually pursue a career in not just fashion but, something creative altogether. Naja laughed about the fact that he was actually a radiologist and the monotony of life got to him to the extent that he realised that the ‘dream’ he had when he was younger was truly achievable if he gave it his all. The loss of ambition made him realise that he could not live without creativity and that was all that he wished to surround himself in. He came to his fashionable senses and pursued his love for the fashion world by enrolling to learn more about fashion and everything about it. Therefore, in 2012, the brand was born.

I’d call Naja a chameleon, given his love and obsession for experimenting with colours. In his previous collections, I hardly found a few pieces of black and when I did, I was stunned by the reflection of the galaxy on them. I was already enamoured by his genius creations and their simplicity that if any given day if you asked me to wear any piece by Naja Saade, I would pick one with my eyes closed.

“Naja laughed about the fact that he was actually a radiologist and the monotony of life got to him to the extent that he realised that the ‘dream’ he had when he was younger was truly achievable if he gave it his all.”

The humble man that he is, he made sure that he constantly mentioned his team and their efforts every time he spoke about his business. Never once did he even try to take the entire credit of the designs that I was fawning over. He spoke about the little things that make the collection stand out and the length he and his team go to in order to achieve that. Whether it is his favourite jumpsuit from his Maharani collection or his Qatari clients’ love for his style, this guy knows exactly how to treat his audience

He spoke of his own culture with a new zest and I saw his love for Lebanon reflect in his body language. A suddenly excited Naja talked about how his childhood and everything around him inspired him to achieve the status he has today. Believing that fashion and art can give a country an identity, an image in the world, Naja Saade is what I believe to be a creative genius with the most humblest of souls.