Jewellery
2 months ago by Ohlala Team
0

IN A NEWLY DESIGNED 43 MM CASE

Le Brassus, June 2021 – Swiss Haute Horlogerie manufacturer Audemars Piguet is happy to announce the release of a new complication in the Royal Oak Offshore collection. Limited to 100 pieces, the new selfwinding timepiece combines flying tourbillon with flyback chronograph in a brand new case diameter of 43 mm, paving the way for a new generation of redesigned Royal Oak Offshore models. Although it retains the essence of the Royal Oak Offshore’s original characteristics, the case has evolved to offer optimum ergonomics and aesthetics while the dial reveals the muscular architecture of the new movement hand-finished to the nines. Complemented with the Manufacture’s new interchangeable strap system, this high complication brings together efficiency and technical sophistication. 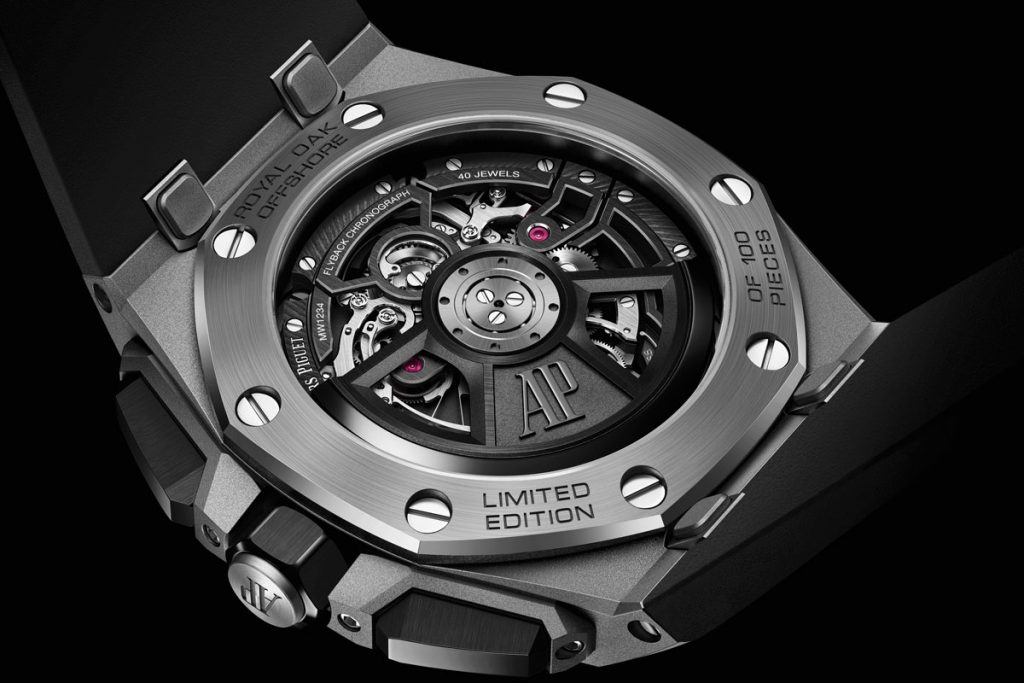 The newly designed case in 43 mm nicely frames the bold yet refined aesthetics of the hand-finished architectural and multi-layered movement. © Courtesy of Audemars Pigue

The Royal Oak Offshore limited edition is powered by a new aesthetic interpretation of the Manufacture’s selfwinding movement with flying tourbillon and flyback chronograph originally released in the Code 11.59 by Audemars Piguet collection. While the flyback function enables to restart the chronograph without stopping or resetting it first, the flying tourbillon making its rotation at 6 o’clock compensates for the effect of gravity.

Adapted to the watch’s new diameter, Calibre 2967 presents a more sportive aesthetics attuned to the collection’s identity. Redesigned, the architectural titanium bridges adorned with black PVD coating incorporate titanium inserts for a two-tone contrast. While the titanium bridges have been finished with satin-brushing and hand-polished angles, the inserts present an alternation of sandblasted and polished surfaces for more visual appeal. In addition, the bridges’ external chamfers have been meticulously polished to remove the black PVD coating to further the contrast of colours and textures. The bridges also reveal part of the multi-layered movement’s two-tone components on both sides of the watch. Similarly, the flying tourbillon cage showcases the rhodium-toned balance wheel pulsating within. In addition to uncovering part of the gear train, the sapphire caseback presents the collection’s openworked oscillating weight in 22-carat gold coated with black PVD.

With 65 hours of power reserve when not on the wrist and water resistance to 100 metres, this complicated limited edition is fit for sporty adventures. 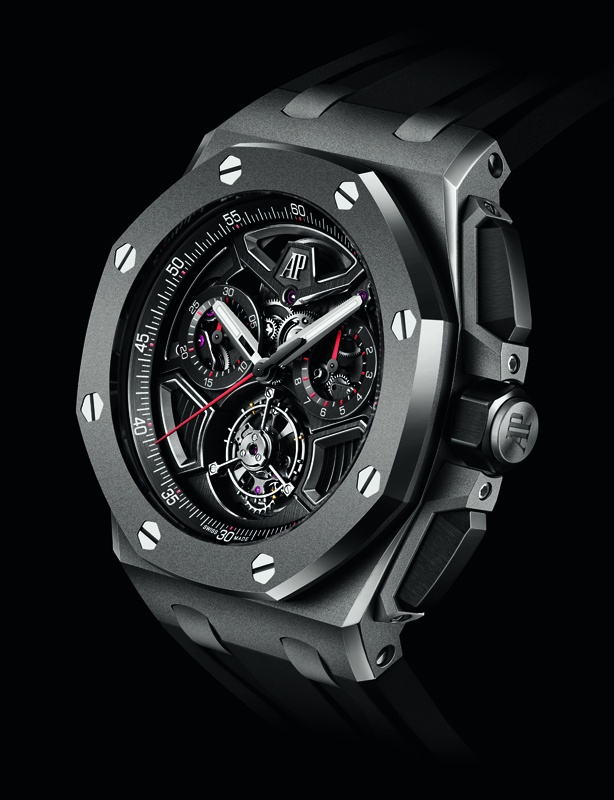 This Selfwinding Flying Tourbillon Flyback Chronograph marks the beginning of a new generation of Royal Oak Offshore in 43 mm that combines the collection’s powerful identity with a more ergonomic design. The timepiece’s titanium case presents larger polished chamfers on the edges, while the bezel and glareproofed sapphire crystal have been vertically curved for a contemporary touch. The black ceramics screw-locked crown and chronograph pushpieces also follow a refined curvature, while subtly echoing the movement’s grey and dark hues. The alternation of hand-polished chamfers and sandblasting finishing adorning the case and bezel also provides an impactful contrast.

In place of a traditional dial, the hand-finished architectural and multi-layered movement provides the ultimate backdrop for the dial aesthetics. The two transparent chronograph counters, outlined with a black outer ring, leave the view of the two-tone movement unencumbered. The movement’s dark hues are also illuminated by more assertive 18-carat white gold hands, a white transferred minute track on the black inner bezel, as well as applied rhodium-toned AP initials realised in galvanic growth, appearing without the long-form signature. Last but not least, the red chronograph hands add a vivid touch of colour. 3

AN ASSORTMENT OF INTERCHANGEABLE STRAPS

This limited timepiece is fitted with the new interchangeable strap system complementing the latest Royal Oak Offshore models. The interchangeability system has been directly integrated into the case’s studs and buckle.

The ease and efficiency of the new system will allow clients to change the straps and buckles of their new timepiece themselves with a quick click and release. The double-push system also grants optimum security when the watch is worn on the wrist.

The black interchangeable rubber strap adorning this high complication is endowed with a new aesthetics with redesigned grooves forming in the continuity of the studs. The watch also comes with an additional black hand-stitched “large square-scale alligator strap. The AP folding clasp in sandblasted titanium also offers a new ergonomic design. 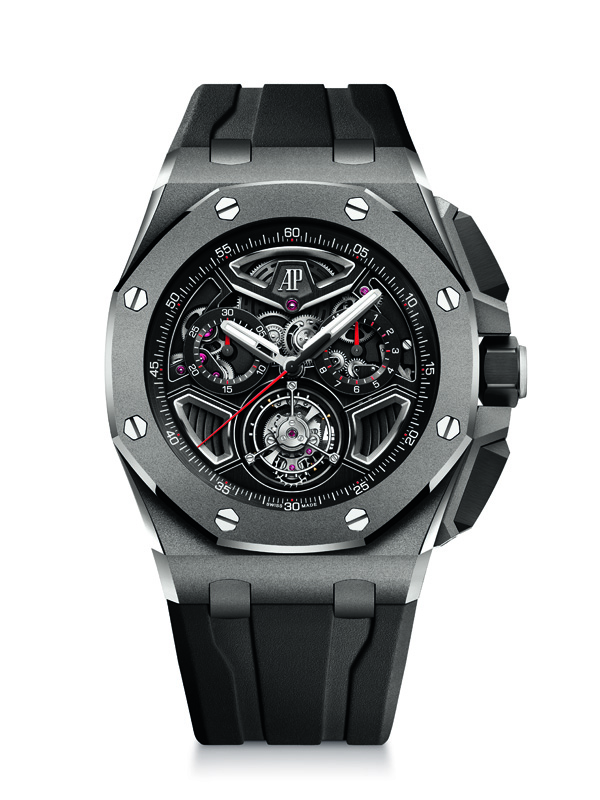 “The aesthetics of the movement originally released in the Code 11.59 by Audemars Piguet collection has been redesigned in the Royal Oak Offshore style with Calibre 2967. Its blackened architectural bridges, honed from titanium, have taken on a more sportive and bold look with decorative titanium inserts bringing relief, contrasts and plays of light. Opening onto the multi-layered movement, they also reveal new sporty decorations deeper down for a powerful contrast to the smallest detail. This is the marriage of tradition and innovation at its peak.”

“Born in Le Brassus, raised around the world.”